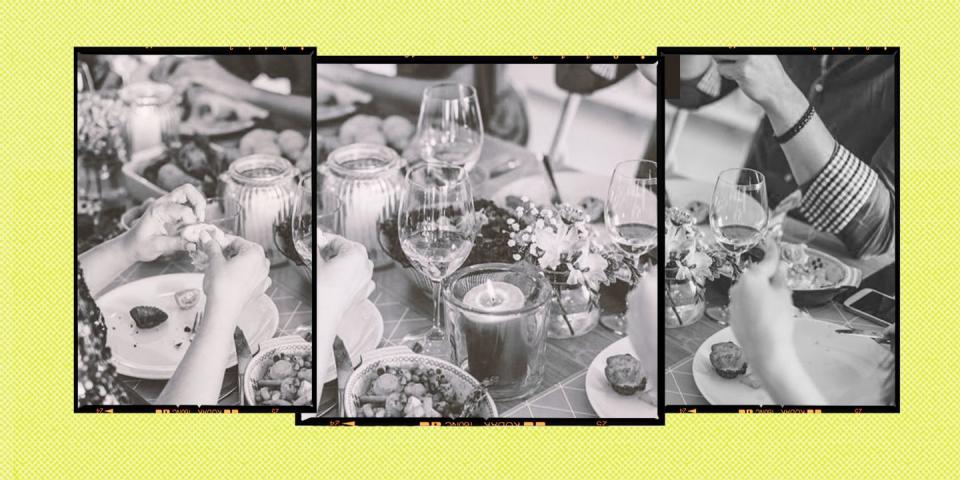 Dinner parties can be just as fun as a night out. And as the evenings get colder during the winter months, we’re finding ourselves less inclined to venture out and about, and more keen to spend a night in with friends.

Still, a dinner party doesn’t have to be all cheese and wine (although we’re big fans of that too). There’s plenty of fun to be had, and that’s where some dinner party games come in.

If it’s your turn to host the next dinner party and you’re looking for ways to spice up the evening, a little bit of organized fun never did anyone any harm. (It also takes the pressure off you and entertains your guests while you try and perfect your homemade Nando’s. Good luck!) From the best drinking games to fun quiz rounds and house party games for adults, let’s be real – anything that involves forcing something competitive on our friends and family is a yes, right?

Once you’ve got the eating out of the way (did you go for lemon and herb or super hot?), turn your attention to something fun and silly. Whether you’re up for a 1930s themed murder mystery or a good old fashioned Post-It-on-the-head situation, we’ve got the dinner party game for you. Pair with some cocktails and you’re covered. Enjoy!

You will need: a stack of Post-It notes and some pens.

How to play: Give each member of your party a chunk of Post-It notes. Take it in turn to ask a question, which everybody writes their answer to on one of the Post-Its. The aim of the game is to try and match your answers to other people in the group, a bit like the opposite of Pointless. Every time you get the same answer, you win a point, and the person with the most points at the end wins. Questions can be anything from the celebrity you’d like to spend the night with to the person in your group who can’t hold their drink – the more obscure, the better!

What Do You Memes?

You will need: the What Do You Meme? card game.

How to play: The party game for the social media generation. Each round has a rotating judge who plays a Photo Card, and the rest of the players have to play a Caption Card to complete the meme. The judge decides the best pairing, so whoever plays the funniest Captain Card wins the round. Note; when playing a card, try and match the judges sense of humor to give you a better chance of winning.

How to play: This one takes a bit of planning, but is so worth it. If you’re hosting, take some time to go through each one of your invitee’s Facebook profiles, and find some embarrassing status updates from years ago. Screenshot and print them off, making sure not to include who posted them, and make everyone at your party guess who wrote what. Depending on how far back you go – and what people were sharing – this can be pretty hilarious.

You will need: The Talking Tables Lucky Dip game.

How to play: A game created for two or more people, Lucky Dip encourages everyone around the table to get their best thinking caps on. Simply select a stick and shout out the first thing that comes to mind. Examples include an activist, a British city, or an African waterfall. Fun and educational.

You will need: The Talking Tables Discussion Club card stack.

How to play: Less of a game and more of a conversation starter, Discussion Club comes with a stack of cards designed to strike up debate with thought-provoking topics. Question examples include ‘Does technology help or hinder our communication?’ and ‘What’s more important; space exploration or ocean exploration?’ Play with a bigger group if you really want to get a streaming discussion, or choose a more intimate round-table for some deeper chats.

You will need: Drinks!

How to play: This one is essentially a drinking game, because they can be dinner party games too, right? After dinner, ask your party to take it in turns to stand back to back with each other. Ask the pair a ‘Most likely to’ style question, and whoever thinks it’s theirs to drink. If both parties drink, they both have to drink again. If neither drink, they also both have to drink. LETHAL. Questions can range from ‘Who takes longer to get ready in the morning?’ to, you know, the more savage ones.

You will need: No props required, only drinks.

How to play: Sounds easier than it is, right? For the duration of the night, guests aren’t allowed to say the word ‘yes’, or any variation of it. If someone slips up, they have to take a drink, which can result in quite a few wine bottles being opened.

It’s harder than you think when someone asks you if you want a top up.

You will need: The Big Potato Obama Llama card game.

How to play: This is like a classic game of Articulate, but even more silly thanks to the contents of the cards. Big Potato Obama Llama 3 asks players to describe, act and solve rhyming charades. Act out or describe over 500 sentences while your team tries to guess as many as they can. From ‘King Kong playing ping pong’ to ‘A Pot Noodle marrying a poodle’, they’re pretty ridiculous.

You will need: Nothing. Just yourselves!

How to play: Each member of the party gets to pick a category, and then players take it in turn to name something that fits into that category around the table, working through the alphabet. For example, if someone said Animals, going around the table would go something like – Anteater, Bear, Cats, Dogs… until someone failed to think of one.

Another version of this game doesn’t follow the alphabet, but rather players must think of something that fits the category that starts with the last letter of the previous player’s word. Using the Animals example, this would go something like – Anteater, Rattlesnake, Elephant, Tadpole.

You will need: The Cards Against Humanity game.

How to play: This is a game that never gets old and brings out the politically incorrect streak in even your most polite of friends. Players start with ten cards each and the aim of the game is to complete fill-in-the-blank statements with words or phrases that could cause the most gasps. The title refers to the phrase ‘crimes against humanity’, and as the prosecco flows, we all know how it goes.

You will need: A paper bag – and drinks!

How to play: This one always makes an appearance after several bottles of wine have been consumed. All you need is a paper bag and a group of mates willing to embarrass themselves. Guests have to take it in turns to try and pick the bag up with their mouths. When someone fails, they take a drink, etc. etc…

You will need: Post-It notes and some pens.

How to play: For some good old fashioned fun, all you’ll need is some sticky notes and a sharpie pen. Every player writes the name of a celebrity down on their sticky note, and sticks it on the person to their left’s head. Going around the table, each person gets to ask a ‘Yes or No’ question in a bid to guess who is stuck on their head.

You will need: The Host Your Own Murder Mystery game.

How to play: There’s nothing better than some good old fashioned organized fun, which is where Murder Mystery comes in. Throw a 1930s dinner party to go alongside this game, which gives everyone a Cluedo style character and has three alternative endings – so you can plan game nights again and again.

You will need: No props required.

How to play: Upon arrival at the dinner table, ask every member of the party to make a rule. This can be anything from ‘not using the first name’ to ‘only drinking with your right hand’. Every time someone breaks a rule and gets called out, they have to do a forfeit. The trick is to make your rules hard, but not so hard people don’t actually do it. Eg ‘don’t make eye contact’ or ‘no one can use cutlery’ sounds hilarious in theory, but will be scrapped within the first minute.

You will need: Some top-notch quiz questions.

How to play: Whether you’re celebrating someone’s birthday or the festive season is upon you, appoint a quiz master to come up with a good old fashioned quiz. Create ‘themed’ rounds so that everyone can feel involved – whether that means asking questions about people at your party, the year gone by or trivia based on shared memories. Side note: we are not responsible for any competitive outbursts.

You will need: Some savage questions.

How to play: The Voting Game poses questions to your party, who are then given the chance to anonymously submit their answers. The sneaky bits? The questions will be about the other people at the table. Example questions include: Who will be the hardest to recognize in 10 years? Who would lose an election because of something they did in high school? Whose Google search history would you most like to see? This is bound to get the conversation started.